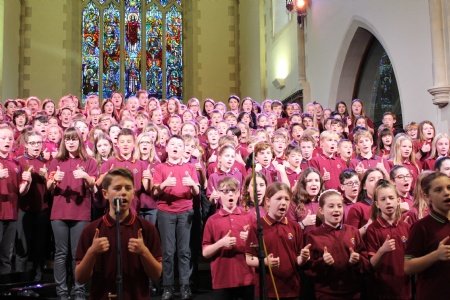 This year's Christmas Concerts had a new venue - St Paul's Church in Weston-super-Mare - and the music making was just as spectacular as the surroundings!

The Academy's musical reputation is exceptional, and the current crop of musicians ensure that this remains intact. The concerts began with Big Orchestra conducted and led by students, and this theme of student leadership continued throughout the performances. Conductor Peter Skeen was in command of the orchestra, and similarly Ella Hutchinson directed the Junior Choir soloists with great skill. The impeccable stage crew was led by Mia Wakeling, and Toby Wilson even added some composition skills by finishing off an experimental piece by Feldman for the Orchestra to perform.

The instrumental groups were impressive across the two nights of the concerts, from the flute ensemble Flutella, to the String Orchestra and the Concert Band. However, the orchestra's performance of Mozart's Piano Concerto No. 23 in support of soloist (and Churchill Young Musician of the Year) Jordan Walters was a highlight of the programme. The future of music is also in good hands, as the top three in the Junior Music Maestro competition - Oscar Vince, Aislinn Shipton, and winner Rhiannon Allen House - entertained the audience on Friday night with their skilful performances.

The Christmas Concerts are also a good opportunity to get a preview of what is in store from the Academy's school production, which will be at the Playhouse in February. This year it is Sondheim's Sweeney Todd - the Demon Barber of Fleet Street - a fiendish show in both musical complexity and storyline! The excerpt presented here promised that audiences will be in for a treat.

Churchill is perhaps best known for its choirs. The new Year 7-9 pop choir was a great example, with Ms Dalwood leading the singers through some great new repertoire. The Chamber Choir were stunning as always, with the commitment of the soloists in Shadowland (from The Lion King) almost blowing the roof off St Paul's! Youthful Spirit Gospel Choir are now in their 21st year and going stronger than ever, with soloist Molly Johnson's rendition of Massive Attack's Teardrop being a highlight.

As always, the real stars of the show were the massed Junior Choir, who told the nativity story in songs composed by Year 7 students. This year's songs and choir were widely agreed to be "the best ever!"

Thanks as ever to all the many performers, and the staff from the music department and beyond who support music making at Churchill. We have found a great new home at St Paul's and we hope to be back next year!